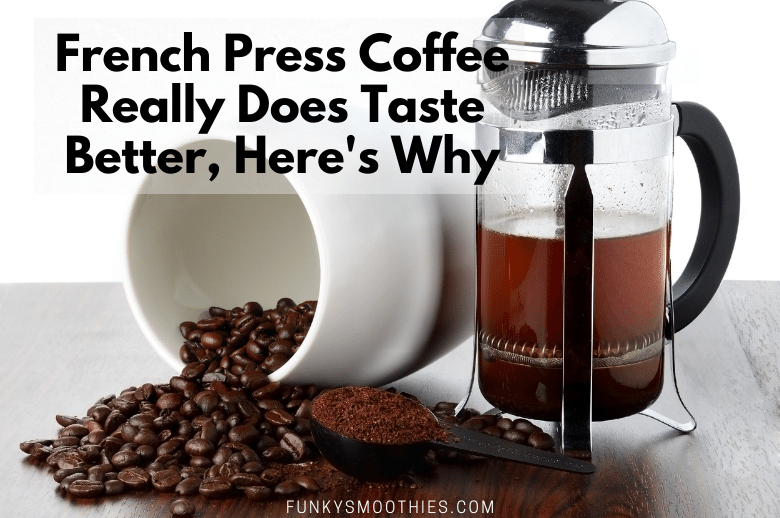 Many people sing the praises of French press coffee, but what really makes it so good?

Well, there’s no singular factor, but rather a collection of many factors. French press coffee is so good because of the grinding method, the freshness of the ground beans, its unique texture, and the brewing process.

One of the great things about French press coffee is your ability to control the size of its grind. Most French presses use medium-coarse or coarse grind coffee, but the size of your grind can be altered by the size of the mesh strainer in your French press. When you adjust grind size, you alter the coffee’s flavor profile.

A finer grind can unlock more flavors, but require additional filtering and may cause bitterness if over-extracting occurs. But a coarser grind can reduce the bitterness from over-extracting and provide greater flavor development. The ability to select a grind that produces a flavor profile you enjoy is one of the reasons French press coffee tastes great.

The fact that French press coffee is made with freshly ground beans is a big reason it tastes awesome.

You see, coffee beans have oils in them that are quite necessary to their flavor. That oil is kept contained in the beans until right before brewing when they are freshly ground.

This is opposed to pre-ground beans you may use for other types of coffee. Because those pre-ground beans are often sitting on a shelf in a store for some time, their tasty oils slowly oxidize and fade away.

In other words, the longer you wait to brew coffee from beans that have been ground, the less tasty they are. Fresh ground beans always taste better.

Admittedly, the texture isn’t exactly something you ‘taste’ but most anyone would agree it’s a big part of a flavor profile. French press brewing often leaves small coffee particles behind, which can offer a more full-bodied flavor that many people enjoy in French press coffee.

These particles also reduce the acidity of the coffee.

To be fair, not everyone likes this texture, but many believe it is a reason French press coffee tastes so good.

Obviously, the main thing that sets French press coffee apart from the alternatives is the way it is brewed. It’s all about timing. A percolator coffee machine, the kind that most people rely on, has water running through the coffee grounds quickly. The water picks up some flavors, but can’t get the ones that take time to develop.

A French press allows the coffee grounds to sit in the water a little longer, really absorbing most of the flavors of said grounds before depositing it in your cup. 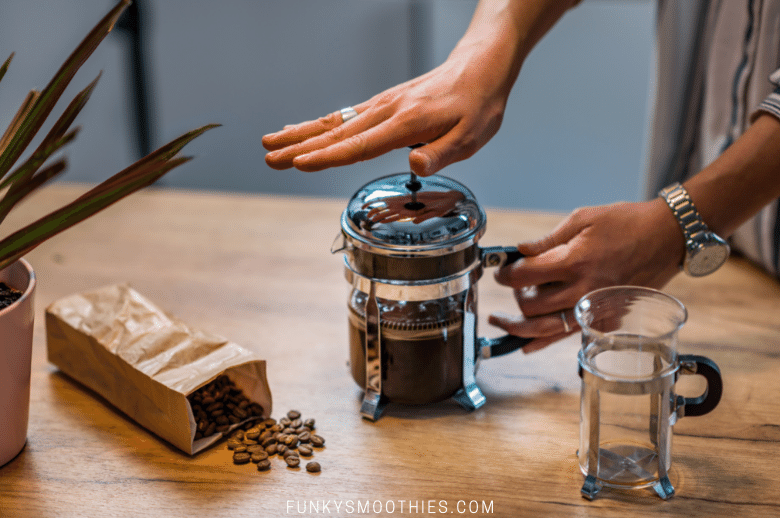 On top of that, other coffee machines often use paper filters, which can stop some of those earlier mentioned coffee bean oils from getting into the final product. French presses don’t have this issue.

The brewing process also affects how much caffeine is in French press coffee. Caffeine naturally occurs in coffee beans, and the longer coffee grounds are brewed, the more of that caffeine is going to wind up in your drink.

That said, while a French press uses a slower brewing process than, say, an espresso or a latte, it is still much quicker than cold brew coffee or drip coffee.

So French press coffee does have more caffeine than faster-brewed coffees, but it has less caffeine than the slower brewed ones. It’s all about how long the grounds are steep.

So, why is French press coffee so good, especially compared to some of the competition? Well, the coffee beans are ground just before brewing, and that freshness adds a ton of flavor.

You can adjust how coarse or fine your grain is with a French press as well, allowing you to create the flavor profile you like the most.

On top of that, the grounds steep longer in a French press than they do in quicker options, which allows the water to absorb deeper flavors that need time to develop. Finally, the coffee particles that are left behind provide a unique texture that many French press enthusiasts love.