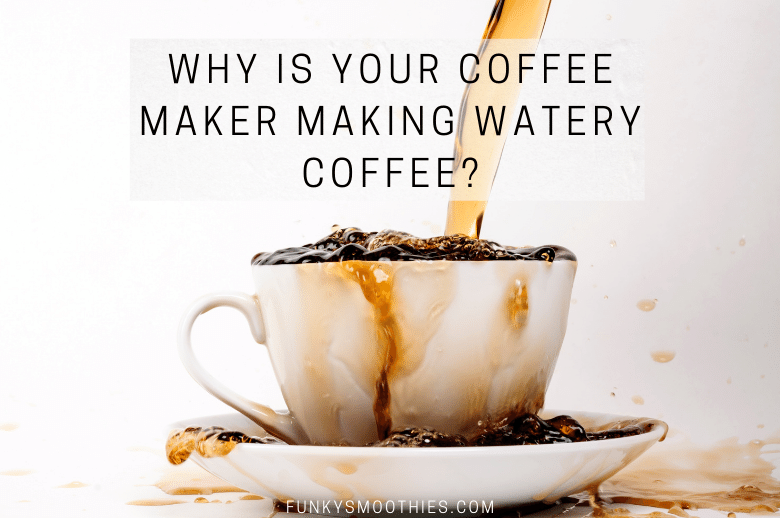 A watery batch of coffee isn’t always because you are using too little coffee in ratio to water. Sometimes, coffee makers make watery coffee because the grounds are too fine or coarse, the coffee maker is malfunctioning, or the water isn’t getting hot enough.

To learn more about the specific reasons that coffee makers produce water coffee, keep reading. I’ll explain the causes and different ways you can fix this problem at home to get less diluted batches of coffee.

Stick around to the end of the article to get answers to frequently asked questions.

If the problem lies in the coffee beans you’re using, then you’ll want to first assess if you’re using the right quantity of coffee grounds. It’s basic logic to guess that a higher ratio of grounds to water is going to produce stronger, less watery coffee.

But when we get down to the specifics, keep in mind that a standard batch uses roughly 2 Tbsp. of coffee grounds per cup (8 fl. ounces) of water. But a lot of people end up using a teaspoon or heaping their tablespoons, resulting in different dilutions of coffee.

If you feel that your coffee is watery, you might consider increasing that ratio above two Tbsp. per cup.

Another problem that might be caused by the coffee itself is having an incorrect size when it comes to the grounds.

Typically, this occurs when the coffee grounds are too large (coarse) for your coffee maker.

It’s possible that the coffee is getting brewed too quickly, which doesn’t give the maker enough time to brew the large grounds. As a result, there’s more water than coffee in your pot.

Further, the problem might lie in your coffee maker. Did you buy a cheap or secondhand coffee maker? If so, it could be that one or more internal components are faulty and causing issues with brew timing. 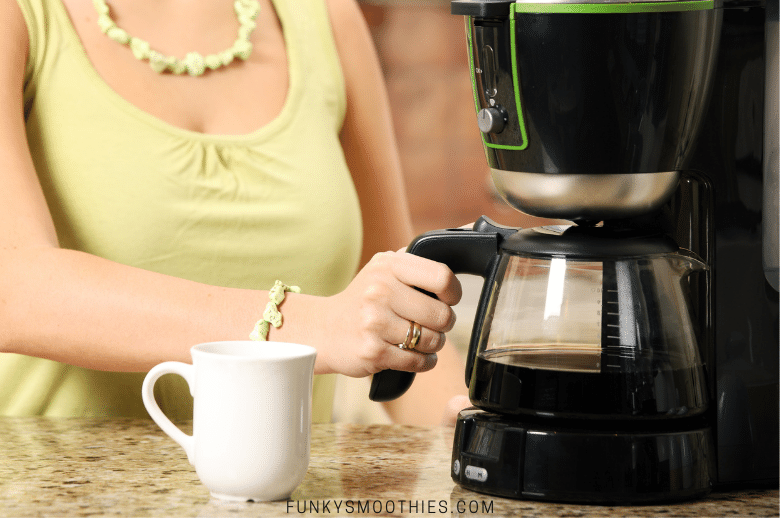 As previously mentioned, you need coffee to brew for a certain amount of time. A faulty maker could be shutting off the brew cycle early, thus resulting in weak, watery coffee.

Last but not least, I want to touch on the brewing temperature and how important it is in terms of dilution. You typically want the water in your coffee maker to reach a slightly lower than boiling temperature – around 200 degrees Fahrenheit.

If your home coffee maker is broken, though, its heating component might not be getting the water hot enough before the brew cycle starts. If it’s too cold, it won’t properly brew the coffee.

How to Fix a Watery Coffee Problem

To fix the issue of diluted coffee, you basically need to assess both your coffee grounds and your coffee maker. Depending on which one is causing the problem (if not both), you can proceed to the solution.

The first possibility is to change the coffee grounds you’re using from coarse to fine.

The brew will likely turn out less diluted this way with a standard coffee maker.

Use a Different Amount of Coffee Grounds

You can also make the quick fix of adding more coffee grounds to your maker so that the brew won’t be so diluted.

Fix or Replace the Coffee Maker

Third, if you’ve made the above changes to your coffee grounds and still end up with watery coffee, you might need to replace or repair your current coffee maker.

Sometimes buying a new coffee maker will be cheaper than fixing your existing one.

What is the best ratio for coffee to water?

Most people prefer to use about 2 tablespoons of coffee grounds for every one cup of water they put in their coffee maker.

However, others like to use a heaping tablespoonful, and some people even use a ratio of 3 tablespoons for every 12 ounces of water instead.

How long should you grind coffee beans?

If you grind your own coffee beans, then you may need to extend the number of seconds you grind them to get less diluted coffee.

For finer coffee grounds, which should make the coffee less watery, aim to grind the beans longer than 10-15 seconds.

You could be dealing with a coffee maker that doesn’t brew long enough or get the water hot enough to make the coffee. Or, you could be using too few coffee grounds or grounds that are too coarse.

Inspect your grounds and coffee maker before choosing which solution will work best for you.